Autoimmune diseases are more prevalent now than ever, with millions of people suffering from rheumatoid arthritis, type 1 diabetes, lupus, psoriasis, asthma, multiple sclerosis, celiac disease, among others. In these autoimmune diseases, the body basically attacks itself as if it were a foreign invader.

The common factor underlying these diseases is inflammation, which leads to the autoimmune response. This inflammation has been studied in recent years and it’s been found that there may be a correlation between chronic inflammation and the western lifestyle, including an inflammatory diet with mainly processed foods and refined sugars, a lack of fatty acids, antioxidants, other beneficial nutrients, and a lack of adequate physical activity. This on top of free radicals, which are harmful particles in our environment, which could be kept at bay with naturally-occurring antioxidants.

One way to minimize this inflammation and therefore reduce the symptoms and discomforts of all of these autoimmune diseases, it is recommended that those at risk or suffering from them completely avoid high-fat, high-sugar, and highly processed foods. But then the question is, what do we replace those with? And what foods have the opposite effect? Well, here are foods and beverages that not only don’t cause inflammation, but they actually help reduce it!

Oh, I’ve also added some links to some of my favorites so you can buy them too! 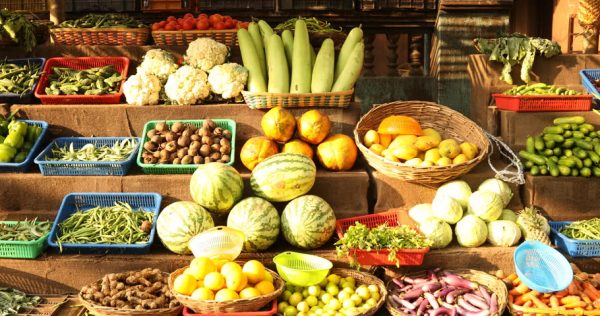 This one is pretty obvious. There is no health-conscious diet that doesn’t include these megastars. Making 50% or more of your daily food intake fruits and vegetables is a sure-fire way to get healthy, support your immune system and just make your body work well all over. Fruits and vegetables are packed with antioxidants, which help fight the effects of free radicals, the cause aging and inflammation. Besides antioxidants, some have high amounts of vitamins, like vitamin C in citrus fruits and vitamin K in dark, leafy veggies; both of which are anti-inflammatory.

It is recommended to eat 9 servings of these good carbs (1 serving = 1cup) per day, especially the most colorful ones; the more color the better! Dark green, red, and purple fruits and veggies offer the most of these benefits, so stock up on beets, broccoli, kale, cherries, blueberries, strawberries, pomegranates, and any other colorful fruits and veggies you can find! Dried fruits make great candy replacements! 😉

Fish is mostly lean and high in protein, making it a go-to food when looking to build muscle and stay lean. But certain fish also have high levels of Omega-3 fatty acids, which, you guessed it! help reduce inflammation! Omega-3s also help fight off depression and lower bad cholesterol, so… bonus!!

Eat 4-5 oz. of fish high in Omega-3s two to three times per week to reap the above-mentioned benefits; the best are salmon, sardines, tuna, scallops, anchovies, herring or bluefish. Try to avoid farm-raised fish, as it may have more contaminants than wild-caught varieties, and stay clear from too much whitefish, swordfish and mackerel, which have a high mercury content.

While it’s preferable to eat the fish, if you can’t stand the taste or it’s hard to find fresh fish in your area, 600 to 1000 mg of a fish oil supplement will also make a difference. Barlean’s is a great choice, and it has an orange flavor so you won’t have that fishy aftertaste.

While high in calories, nuts and seeds are also great anti-inflammatories thanks to their high vitamin B6 content. In a study, it was discovered that there is a positive correlation between levels of B6 and inflammation, with women low in the vitamin showing higher incidence of inflammation.

Because of their calorie content, nuts should be eaten in moderation. Just 1 or 2 ounces per day will supply you with all the anti-inflammatory goodness necessary. The best nuts for this are walnuts -which are high in Omega-3s as well as B6, and are also great for fighting off depression naturally-, almonds, and pine nuts. (Peanuts are NOT nuts, so let’s avoid those). Chia seeds are also highly beneficial, as they have both Omega-3 and Omega-6 fatty acids!

A staple of the heart-healthy Mediterranean diet, olive oil (especially virgin or extra virgin) is packed with beneficial phenolic compounds, one of which is oleocanthal. Oleocanthal also happens to have a similar effect as NSAIDs on the body, leading to lowered inflammation.

Limit your intake to 2 tablespoons per day, and preferably don’t use it to cook with, it’s better eaten in salads or drizzled over cooked food after cooking it. If you must cook with it, do it at low heat to burn as little of the beneficial molecules as possible. Don’t worry, you can even fry with the next recommendation!

If you were sad about not being able to cook at high heat with EVOO, don’t fret! Here comes the magical item in my home, coconut oil. This saturated fat (the natural, healthy kind!) is full of benefits and gifts. In this case, we’ll focus on its high concentration of antioxidants and anti-inflammatory properties, which are quite opposite of canola oil, hydrogenated oils, margarine and vegetable oils, which actually tend to cause inflammation.

Like with olive oil, you want to limit your intake to 2 tablespoons per day. Or you could cook with coconut oil and dress your salad with EVOO! Best of both worlds!

Oh, and be sure to stick to virgin coconut oil, if it stays liquid even at low temperature, you don’t want it. Nutiva’s virgin coconut oil is my go-to, especially since they have decent prices for good quality and a range of sizes to chose from.

If you’ve ever eaten Indian curry, you’ve tasted turmeric, it’s what makes it yellow! Curcumin is the main compound in turmeric, and it’s what makes it so amazing. Besides its anti-inflammatory properties, it’s also a powerful antioxidant, boosts immunity and it even improves brain function.

You’d need to eat a lot of turmeric to get the full amount of curcumin needed for marked effects, but adding it into your diet along with the other foods on this list will certainly add up. Or you can take a curcumin supplement instead! Whichever you choose, combine it with black pepper, as pepper helps the body absorb it better.

Another miracle-food. Touting vitamin C and B6 among an army of other micronutrients, ginger does everything; calms nausea, is a decongestant, and aids in detoxification. Of course, it also reduces autoimmune responses, thus reducing inflammation, and has even been known to regulate blood sugar levels and cholesterol. As a bonus, if you tend to get cold easily, a cup of ginger tea will warm you right up!

You can use the fresh root and make tea with it, or use ginger powder to add to your foods or beverages! Use as much of it as you like.

While many teas have anti-inflammatory properties, few are as great as green tea. Green tea is loaded with antioxidants called catechins which fight free radicals and reduce inflammation. Polyphenols in tea make it anti-aging as well as an immunity booster and a cholesterol regulator.

You can have as many cups of tea as you want, but remember green tea has caffeine in it -though much less than coffee-, so make sure you don’t drink it too late at night if you are sensitive to caffeine. To brew, you want to boil the water and then add the tea and steep for 5 minutes. Don’t boil the tea or you’ll destroy all the beneficial properties. I prefer the Japanese green teas, but any green tea is fine.

While I don’t personally eat grains (at least not 80% of the time) and I am an advocate of the paleo and primal approaches, I understand there are some people who don’t want to or can’t drop grains altogether. However, there is not much indication -like with the rest of these foods on the list- that grains actually reduce inflammation, in fact, if processed, they make it worse! Especially wheat. So, if you must eat grains, avoid wheat since it tends to be the most inflammation-causing grain, and really, it’s one of the least nutritious ones.

One to two cups per day (max.) of whole, low glycemic index (GI) grains will keep you full and won’t affect your sugar levels too much. The best grains (if you must!) are: quinoa, buckwheat, bulgur, barley, brown rice, basmati rice and oatmeal. At least try not to eat grains more than 2-3 times per week. And make sure they’re whole! Not processed and/or refined. (See? It’s easier to just not eat them…).

Some professionals will include whole grains in these recommendations, but my personal experience, as well as some of my clients’, has been that eliminating grains actually reduces inflammation faster and keeps it at bay. I started doing high impact exercise when I was 9 years old and had an injured knee by the time I was 15. This knee would swell often and, for years, it caused me pain and discomfort while exercising and even at rest. Fast forward over a decade later (at that point, both my knees were bad), I stopped eating grains and legumes as well as refined sugars and processed foods to change my body composition. A surprising side-effect of this lifestyle change was the fact that my knees stopped swelling, no matter how much exercise I did! Not only that, my menstrual cramps became less painful/prevalent, I don’t get headaches, and I have way more energy. I also suffered from a mild exercise-induced asthma, and now, I have no issues when exercising or running, even when outdoors in the cold! But if I eat bread or sugary treats for a couple of days, I’ll feel the swelling in my knees and get a slight headache the next day. So, while it’s up to you whether you want to kick grains out completely or not, I recommend getting your carbs from fruits and vegetables instead.

What’s great about these guidelines is that you don’t need to suffer from an autoimmune disease to follow them! Even if you’re healthy, you will feel the difference if you eliminate processed foods, refined sugars, hydrogenated fats (and grains!), eat mostly fruit and veggies, fish 3 times a week and season your foods with healthy spices, nuts and the like.

Go ahead! Give it a try! You’ve got nothing to lose but some inflammation and possibly a few extra pounds. Let me know if this works for you and/or your experiences if you’ve already made these changes!